Mark doesn’t read all my blogs, but has seen a few and pointed out how I always speak about very specific events and experiences that have happened each month as opposed to speaking about my everyday life in Guyana. I thought about this and realised that he’s right, so I decided to use this post to document 26 different aspects of Ridge life that I feel are the most important. Not only should it be interesting for the usual reader of these blogs, but I’ll give me something else to look back on once I return (in under two months!?).

So here it is, the A-Z of life at the Ridge in pictures: 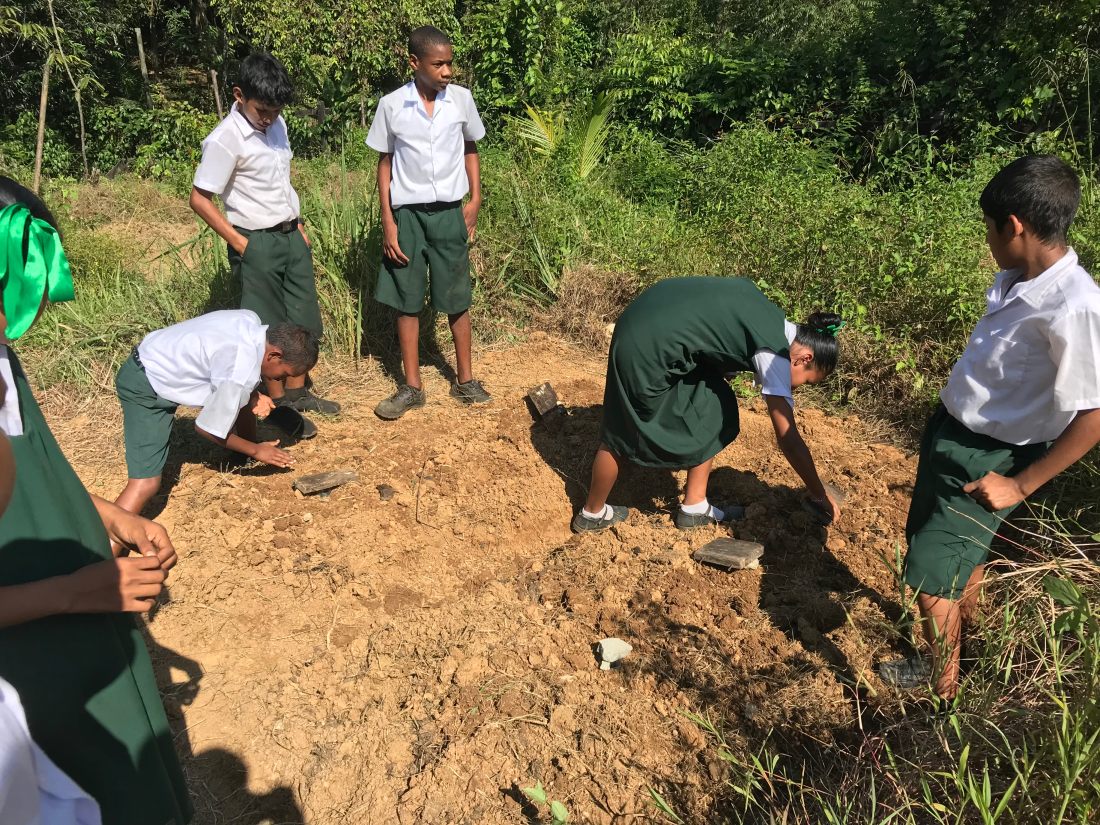 Teaching this subject has been a challenge, but one that I’ve enjoyed thoroughly. The children’s engagement with its practical side has really impressed me, and plus I now have an unforeseen depth of knowledge on the planting of cassava and the agricultural institutions of Guyana!

It had to feature. There’s quite simply nothing like a cold Banks, and the number of bottles some people manage to get through each day never fails to impress me.

A place that’s as iconic as its name. Owned by the forever smiling Quacy, it’s our go-to for groceries and good banter.

This company essentially owns Guyana it seems. Their name is on the welcome sign for all the nearby villages, they have rather out-of-place branches everywhere, and they’re able to charge extortionate prices as they are the only option. We both love and hate Digicel.

Esan’s been a key part of our time in Matthew’s Ridge. I’m pretty sure I’ve never seen him sober, but also never unwilling to give us something or take us somewhere. He’s such a classic example just how kind everyone seems to be here.

I was told that cricket would be the main sport in Guyana, and while it certainly is popular, I’d definitely say football is the favourite in Matthew’s Ridge. Not only does it provide entertainment for those who choose to join or watch the daily game by Mr Greg, but the Floodlight Football events are ones to look forward to: inter-village tournaments that runs well into the night followed by an afterparty that continues even later.

GPL (Guyana Power and Light) is the metonym used for the electricity system in Ridge. It claims to come on each day from 5:30pm to 7am, but is infamously unreliable, often causing the village to suddenly be in complete darkness and silence. Fortunately generators are commonplace. 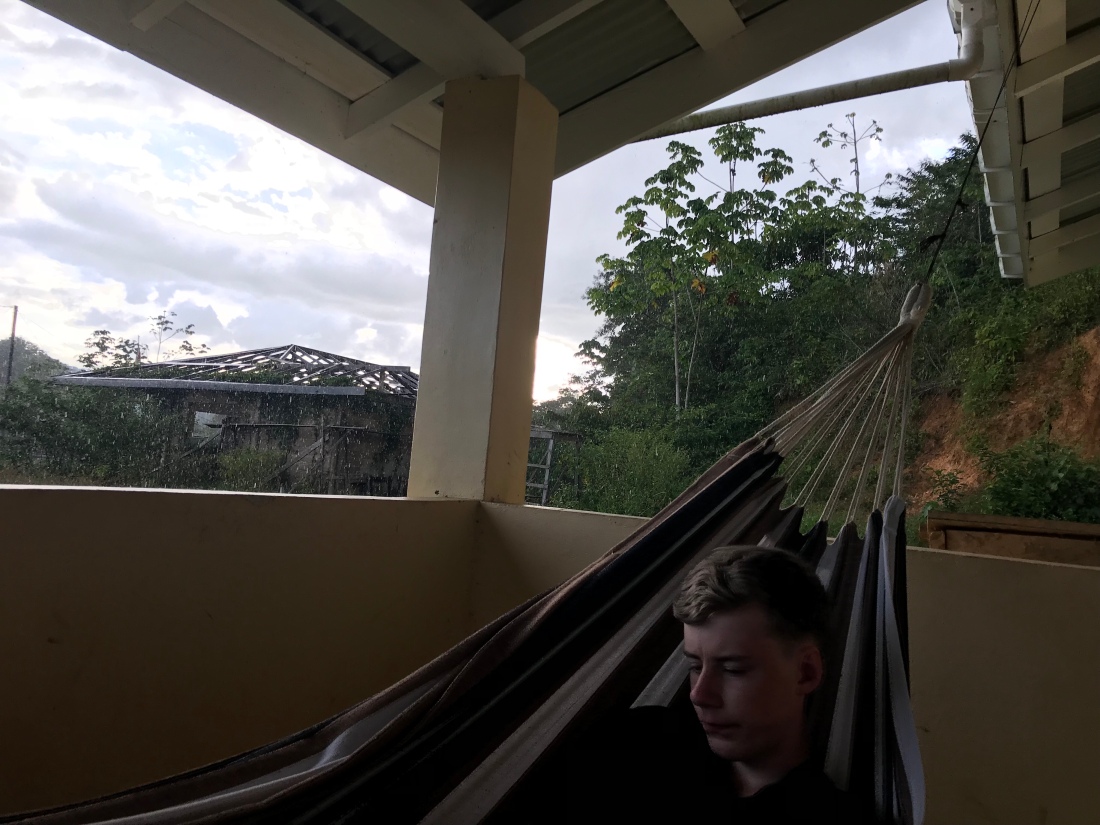 The humble hammock. Simple in concept, life-changing in practice. I don’t want to think about the time I’ve spent in mine escaping the sun or reading at night. It also has provided me with a portable bed on numerous occasions throughout the year – a hammock and some rope is all you need for a cheap night.

The best use of $40 on a hot day? An icicle. It might only be frozen Mac C and sugar in a plastic bag, but it does the job. 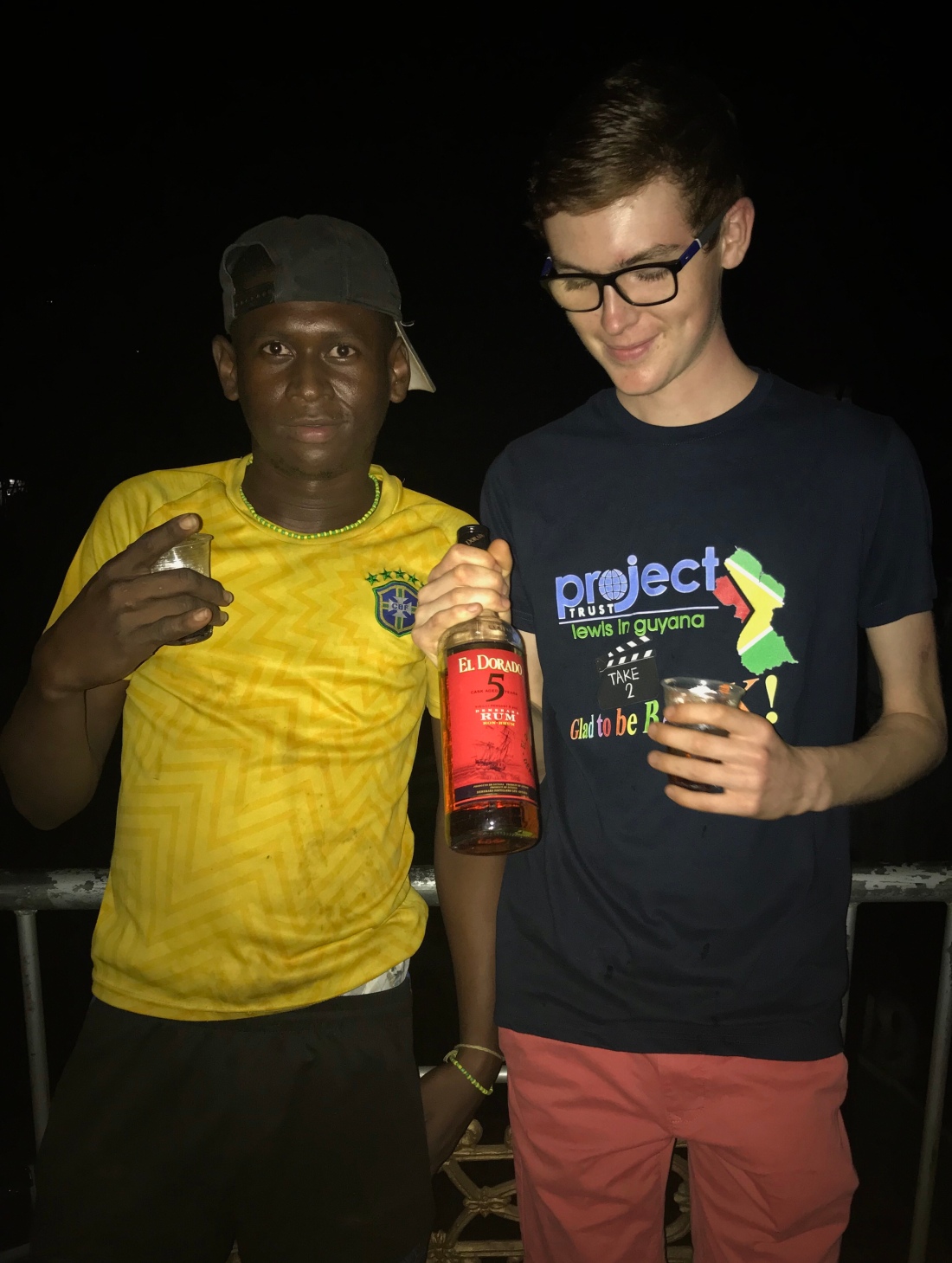 Jerry is another one of the great friends I’ve made this year. He’s proven that doing whatever you want to do it okay, and that spending all the money you’ve made from gold in one rum-filled night is a great way to live. On one such evening he famously proclaimed that “every spoil is a style”, and it’s been written in chalk on our wall ever since.

I’m not a religious person, but have definitely enjoyed becoming involved in the Jehovah’s Witness community during this year. It’s been a new experience for me, but definitely a worthwhile one.

Miss Lexi is a legend. No one even comes close to her when it comes to making our the best it possibly could be through generosity. From the tri-weekly food deliveries she facilitates to our occasional Vita Malt/Banks sessions by Third, from sending unsolicited phone credit to gardenes- she really has gone above and beyond for us this year.

Mining gold is the reason for Ridge’s existence and it’s downfall . It fuels not only the economy, but also the drunken, unaspirational lives led by so many here. It provides an easy way for children to gain independence, but this so often leads them dropping out of school. 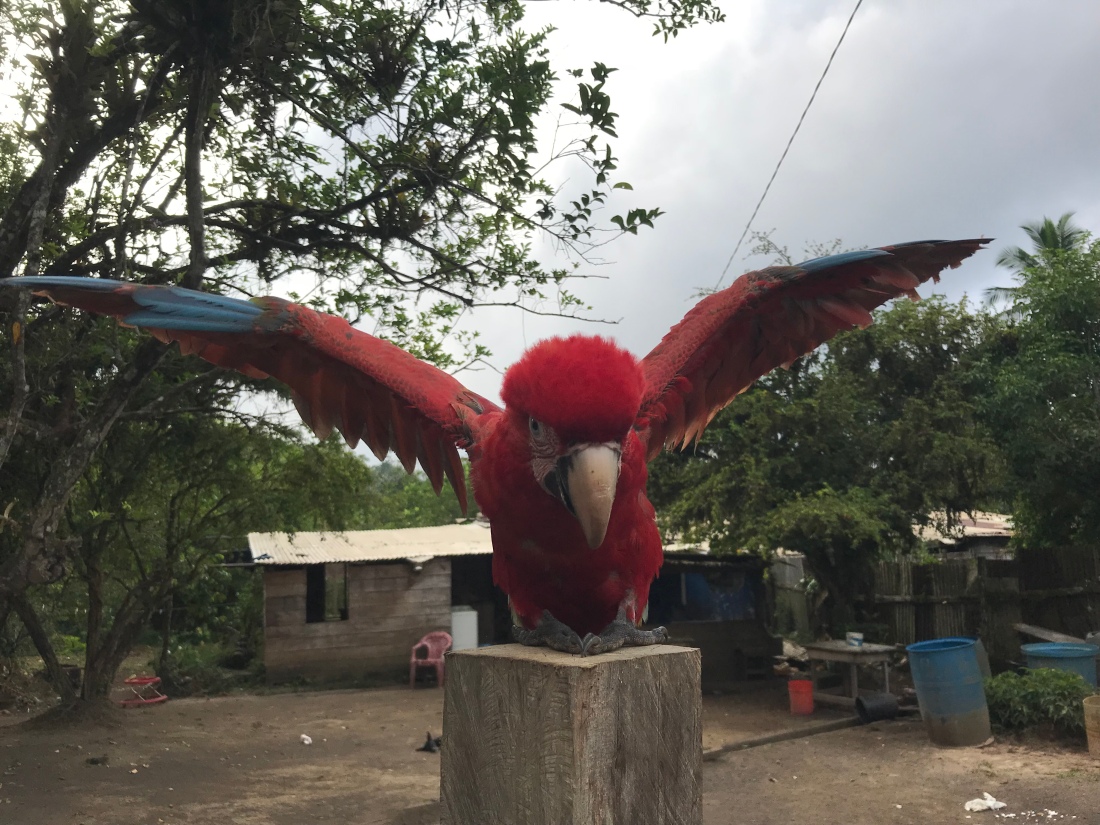 Whether it’s the children shouting at school, the birds with their constant tweeting (and flying into Mark’s window), or the music that blasts from the village each night – Ridge certainly isn’t a quiet place. It’s alive, it’s energetic, it’s exciting.

One of the many new foods I’ve had to learn to cook with this year, okra is a slimy delight. Add it to pasta, fried rice, cook-up, chow mein – its versatile, tasty, and cheap.

If you were to make a postcard of Matthew’s Ridge, you’d put the Pakera Pools on the front. Hosting birds, dragonflies, fish and crabs it’s a lake when high and a picturesque river when low. It’s frequented by locals on Sundays, who pile on to ATVs loaded with ice, rum, and a speaker.

A new May Queen is crowned yearly at the May Fete, and is expected to set an academic and social example to their peers. The crowning day itself was very flamboyant, very over the top, and very Guyanese. 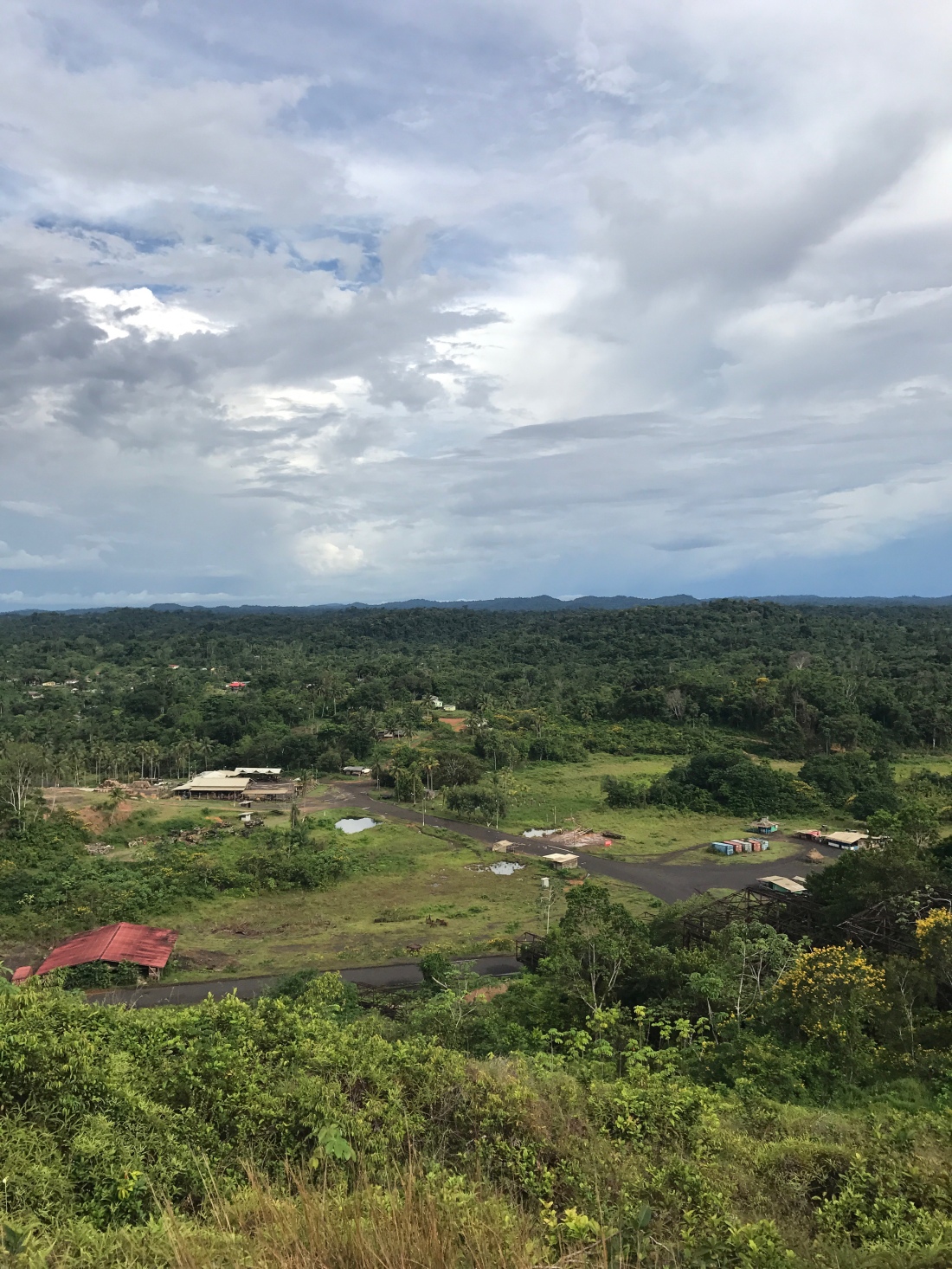 This is one of the most scenic places in Ridge, hosting views of the village below and seemingly infinite expanse of trees that surround it. It’s also home to GMI – the manganese company which has been great for the village. The company has come in, revitalised the dormant mine and its facilities, and provides numerous jobs the community. They may not be the best or the most well-paid, but it’s certainly better than unemployment.

Auntie Shellon makes the best meals in Ridge. Going by her hotel for dinner or lunch is such a treat, and must be the best use of $1000 in the world, genuinely. You might leave 1kg heavier and unable to walk properly, but some sacrifices just have to be made. 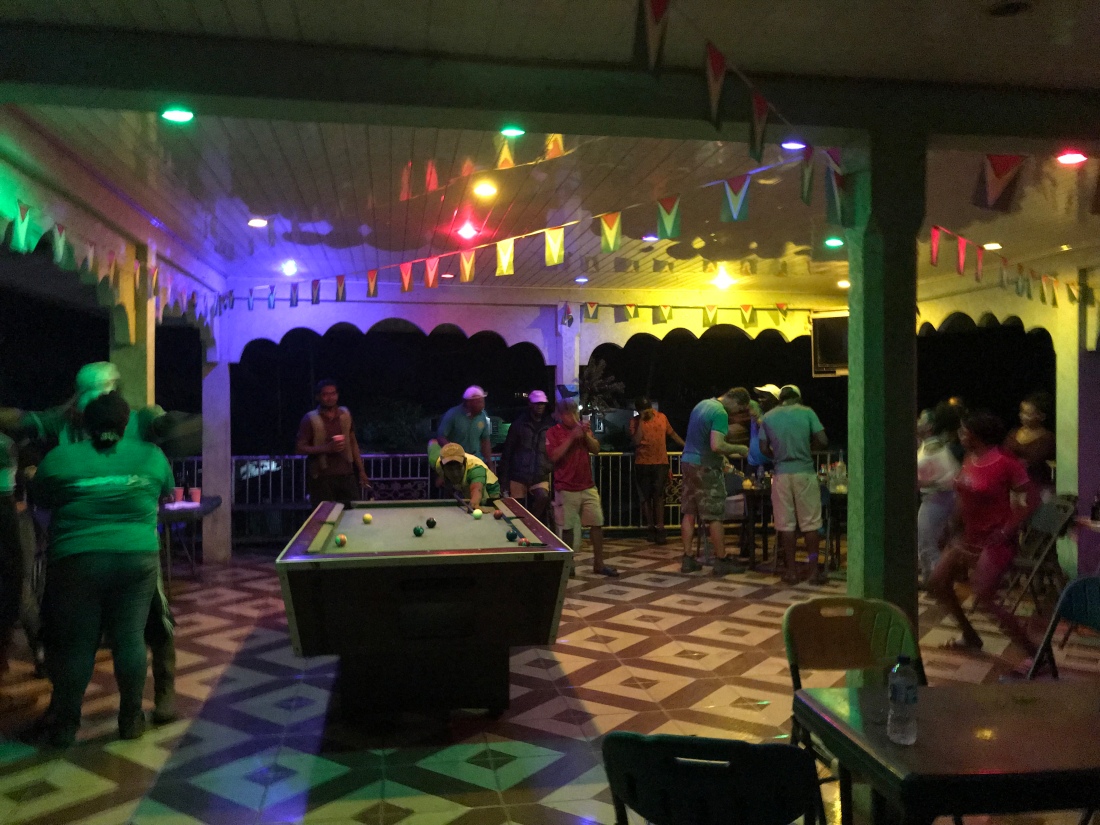 Going by Third is a different sort of treat altogether. Funnily enough he owns the other hotel in Ridge, which has been host to plenty of enjoyable nights of blasting music, pools, and El Dorado.

I couldn’t think of anything for ‘U’, so settled on Udder as synecdoche for the cows that also call Ridge their home. Despite the noticeable lack of beef, these cows seem to be everywhere. They move about in a slightly intimidating pack, which sometimes makes its way to our house, but are largely harmless – apart from when it knocks down out washing.

Volleyball, behind football and cricket, has to be the third most popular sport here which surprised me. We sometimes turn the grass in front our house into a volleyball court which is enjoyed by us and our students alike. 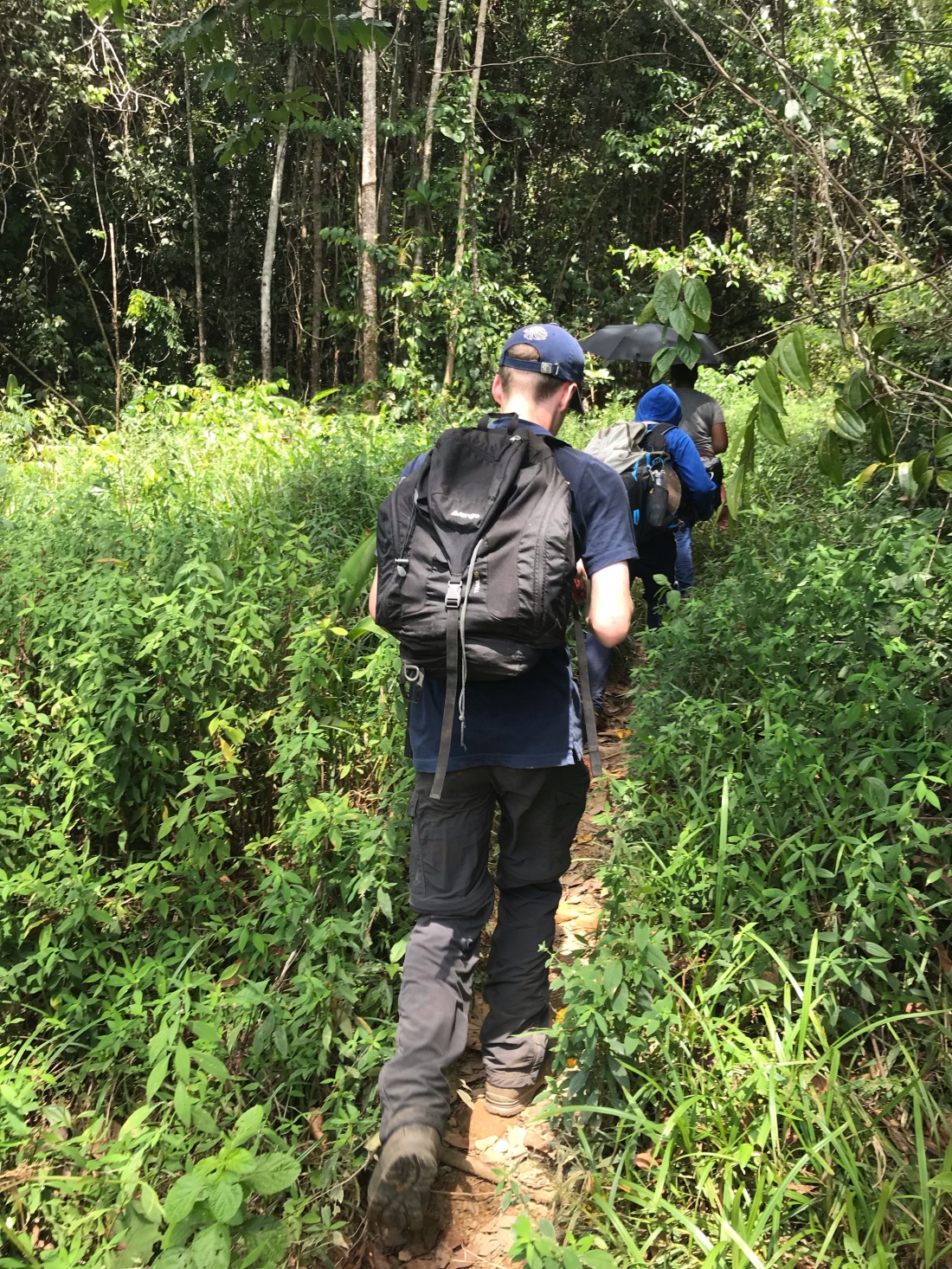 I’d be lying if I was to say there’s a lot to do in Matthew’s Ridge during out free time, so one of our favourite pastimes has been going on walks. So long as the sun’s not too hot and the rain’s at bay, walking anywhere is a great way to relax.

Xtreme Weather (is this allowed?)

When it’s not scorching hot here, it’s probably raining torrentially. I’ll never forget the feeling moments before a downpour when the sky darkens and the wind starts to blow. The rain turns roads to rivers, forces teaching to cease due to the deafening sound it causes on the roof, and traps you in the building you were in when it started – but I love it.

Home to a small stone monument, a dilapidated building, a decaying car, and enough mole to provide for all the cassava you could ever plant, our front garden is pretty iconic. We started the year with a thick barricade of bush out back which provided some privacy, but this was randomly all down one day leaving our poor house looking rather vulnerable. Everyone knows where we live anyway.

I’m not particularly into animals, but would be lying if I said I didn’t find discovering a bat in the shower, a gecko on the wall, or a dragonfly in the sink cool. These occurrences force me to take a step back and realise just where I am, which is far too easy to forget sometimes.

And that’s it! Making this list was challenging for some letters (thanks Mark for your help), but actually really fun. Matthew’s Ridge is a truly amazing place and I hope it goes without saying just how much I appreciate the incredible year it’s allowed me to have. Thanks again, Ridge.

3 thoughts on “A-Z of Matthew’s Ridge”